About Prostate And Man

The prostate is a small, but important gland (organ) in the male reproductive system, it can says that only found in man. It is located in the pelvis, between the penis and bladder. It sits underneath the bladder and surrounds the top part of the urethra. Urine passes through the urethra on its way from the bladder to the penis.

The main role of the prostate is to make fluid that protects and feeds sperm. The prostate produces a thick, white fluid that’s made into a thinner liquid by a protein called prostate-specific antigen (PSA). The liquid is then mixed with sperm, produced by the testicles, to create semen.

A healthy young man prostate is classically said to be slightly larger than a walnut, it gets bigger as a man get older. If the prostate becomes enlarged, it can place pressure on the bladder and urethra (the tube through which urine passes). This can affect how you pass urine and may cause:

It’s particularly common in men over 50 years of age and isn’t usually a serious threat to health. In some men, the symptoms are mild and don’t require treatment. In others, the symptoms can be very troublesome and have a major impact on a person’s quality of life. 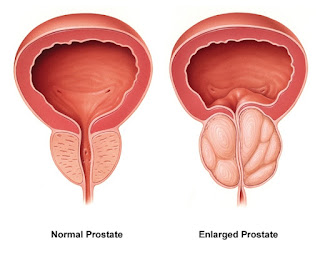 In the later stages, benign prostate enlargement (Also Known as benign prostatic hyperplasia, BPH) can cause urine retention and other complications such as prostatitis,bladder stones, bladder infections and kidney damage. If the prostate grows too large, the risk of developing Prostate cancer may increase as the uncontrolled spread (or malignant growth) of abnormal cells of the prostate.

To prevent prostate problems, you should